Pharmacokinetics: Pharmacokinetics describes what the body does with the drug. Quantitative analyses concerning drug uptake, distribution in the body, and elimination determines the time period that the drug has been active in the body.

Absorption: The uptake in the body depends on the dosage forms chemical and physical properties, physiologic factors (e.g. pH in the gastrointestinal tract), gastrointestinal mobility, and first-pass metabolism, blood flow at the absorption) and interaction with other drugs and food. 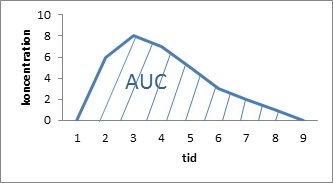 Fig 1. Area under the curve (AUC) is a measure of drug exposure and depends on dose, absorption, metabolism, and clearance etc.

The most common causes of low bioavailability are incomplete absorption and so called first-pass metabolism in the gut wall and liver. The amount of the transport protein P-glycoprotein (Pgp) is expected to be lower in women, which theoretically should provide increased bioavailability in women for the drugs that are Pgp substrates (e.g. digoxin).

Bioequivalence: Bioequivalence is considered to exist in two products with the same active substance if the bioavailability after administration of the same dose is so similar that they get the same effect and side effects. The European Medicines Agency has defined limits for how similar the plasma concentration curve, AUC, Cmax, and Tmax must be to be considered as bioequivalent (typically 80%-125% of the reference values and at least 12 people in the studies).

Clearance (CL): Clearance measure the drug’s elimination in relation to the plasma concentration. How large plasma volume that has been purified of the drug at a specific time unit is calculated by dividing the given dose with AUC. The elimination include metabolism and excretion. The clearance concept can be used to compare the kidney’s ability to excrete various substances and can be calculated by various methods. Women generally have lower renal clearance than men, because women GFR (glomerular filtration rate) is lower. There is also some evidence that women have less transport proteins such as Pgp, which also could contribute.

Renal clearance expresses the relationship between the excreation of a substance per time unit and its concentration in plasma (Px).

Efficacy: A drug’s ability to have a desirable effect.

Effect: The effect of a drug in clinical use.

Exposure: Drug exposure is the amount of drug that an individual is exposed to, which usually corresponds to the AUC.

Genotype: Genotype is the genetic constitution of an individual, usually the DNA of the individual. The qualities which then is expressed is the phenotype. The genotype affects how efficiently different enzymes metabolizes drugs or how carriers of drugs works (phenotype).

Glomerular Filtration Rate (GFR): In general, the renal function is estimated with sufficient and equivalent accuracy (>75 per cent of the estimates within ±30% of measured GFR) with formulas based on the plasma concentration of creatinine or cystatin C. Formulas that only contain cystatin C generally provides good accuracy (however, medication with corticosteroids must be considered). The creatinine-based formulas must contain information on sex, age, and sometimes even measures as weight, height and ethnicity in order to give equivalent accuracy. A conversion factor of the order of 0.75-0.85 is used for women when calculating with Cockroft-Gault, MDRD and CKD-EPI. After correction for age and weight, estimated GFR in women will be on average 10% less than in men.

Creatinine is formed in the muscles by the non-enzymatic dehydrogenation of muscle creatinine, while cystatin C is a small protein that is formed in almost all cells of the body. Creatinine is excreted by glomerular filtration, tubular secretion (which itself can be affected by certain drugs) and extra-renally in the colon. The excretion depends on muscle mass, diet, age, and gender (men generally have more muscle mass than women).

Half-life (t1/2): The half-life is the time taken for the plasma concentration to decrease by half and is determined by the ration of the volume of distribution and clearance and can be calculated from the AUC curve (Figure 2). 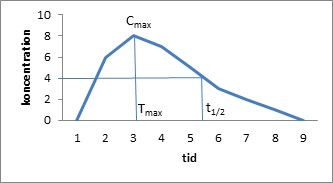 P-glycoprotein (Pgp) is a membrane protein that transports drugs. Pgp reduces absorption and increase renal clearance of certain substances. Many CYP3A4 substrates are also Pgp substrates and this has been proposed as a cause to described contradictory sex differences in CYP3A4 activity.

Table 1. Activity in different metabolic systems in women compared to men, and the effect of hormonal therapy in terms of oral contraceptive pills and HRT (hormone replacement therapy or menopausal hormone therapy).
* There are reports of sex differences in certain ethnic groups but the oral contraceptive pills use in these studies has not been known.
** Easy reduction during the first trimester.

Dose-response: The dose-effect relationship describes the dose that gives the effect.

Adverse effect: Unwanted effects include mediation side effects, but other adverse effects can occur during a drug trial and are not necessary related to the drug.

Adverse Drug Reaction (ADR): Adverse drug reactions are all undesirable effects of drugs. These are usually divided into two groups. Type A-side effects are predictable based on the drug’s mechanism of action and is dose-concentration dependent. This type is the most common, accounting for about 80% of all adverse events. Type B-side effects are usually unpredictable and not related to the drug’s mechanism of action or clearly dose-dependent.

The most common type B-side effects is drug-induced rash, which occurs more often in women than in men. Stronger immuno-reactivity in women and the influence of sex hormones on autoimmunity has been proposed as an explanation for this. Women are also more likely to have prolonged QT syndrome and thus ventricular tachycardia of the type Torsade de Pointes (often a fatal cardiac dysrhythmia) than men. One reason for this is probably that women generally have longer QT interval than men. It has been proposed that male sex hormones leads to shorter QT interval, which would be protective. Drug-induced liver disease is the most common adverse event leading to drug withdrawal, and this event is also generally more common in women.

Drug interaction: Drug interactions can be due to pharmacokinetic interactions, e.g. because a drug inhibits or induces the enzyme that metabolize another drug, or that the transport protein that transports the drugs are saturated. Interactions can also be pharmacodynamic, e.g. drugs that act on the same receptors with potentiation of the effect and / or side effects as a result.

Gender: Gender is a term that describes people’s social gender and the ideas, beliefs and actions that shapes the social gender. When we talk about gender differences we refer to the differences that we believe stems from societal and social factors linked to sex.

Therapeutic Drug Monitoring (TDM): Concentration determination of drug. Used for drugs where there is a known concentration-effect relationship or known toxic concentration. Used to find the optimal dose. TDM can be valuable in risk of interaction with impaired kidney or liver function, during pregnancy (especially certain anticonvulsants) or intoxication. Another situation is in anesthetized or unconscious patients where side effect and effect can be difficult to evaluate. Usually the drug concentration are controlled as trough level (immediately prior to the next dose), but in some cases, the maximum concentration of drug can be if interest.